On those days where surfing is either impossible, or you’re just not feeling it and would prefer to stay in, there are some epic surf movies and documentaries that can keep you entertained and keep your mind on the waves.

Ranging from “so bad it’s good” B movies, to cinematically stunning documentaries and inspiring films, here are some top recommendations for surf themed cinema:

It’s not every day that Kelly Slater appears in an animated surf movie about Antarctic penguins competing for surfing glory. But, that’s what you get in this 2007 classic film with an all star cast.

Kelly Slater, the famous surfer, isn’t the only famous voice that appears in this film. It features Shia LeBeouf as the main character, a penguin named Cody Maverick, who travels to a tropical island hoping to win a big wave surf competition and have his claim to fame.

Jeff Bridges, who many know for his award winning roles in films such as “The Big Lebowski,” voices the character Geek, who seeks to help Cody Maverick in his quest to win the competition.

Surf’s Up is great for many reasons, one being a well written plot that just works, mainly due to its documentary style narration. It is endearing, has emotionally invested characters, some genuinely cute and at times quite stark humor, and some amazing talent behind the animation.

It’s a film that families can watch together, but it’s also entertaining for adults. This film was relatively overlooked when it was released, but it has recently gained some retrospective popularity for its genuine look at surfing and what it takes to be a pro surfer.

Garrett McNamara has quite the story. He overcame a rough childhood and broke the world record for largest wave ever surfed at Nazaré, Portugal, successfully negotiated a monstrous barrel at Jaws, and rode waves from calving glaciers in Alaska.

But what’s impressive about this docu series is that it doesn’t just chronicle the life of one individual person. It goes into depth about his family, their struggles, and how he brought the town of Nazaré from relative obscurity to being one of the top surfing destinations in the entire world.

100 foot wave, at its essence, is about one surfer’s passion (or, one could argue, obsession) with surfing the biggest wave of all time. But it’s also a story about overcoming addiction, fear, and our own self limitations. A must watch for every surfer, for sure!

Bethany Hamilton’s story is absolutely incredible. She is famous for her inspiring story of how she survived a shark attack that caused her left arm to be amputated at the shoulder, and became one of the top surfers in the world.

This documentary is told mainly from Bethany’s perspective. It chronicles not just her success as a competitive surfer after her accident, but also the other hardships she had to overcome in life, and her insights about life and spirituality that she gained from these challenges.

This is a movie for everyone; kids, parents, teens, surfers, non surfers, etc. You don’t have to surf to appreciate what Bethany Hamilton went through, and how she overcame a situation that would have caused many people to never step foot in the ocean ever again.

Bethany Hamilton has been a hero to many, and this documentary does what a good documentary should do: it tells her story as she sees it, highlighting both the good and the bad equally, and always keeping the focus on someone who deserves every single bit of recognition and praise she has gotten.

Surfer girls are rad, there’s no doubt about that. In the 2000’s, the rise of the “surfer girl” image was a cult phenomenon that was, of course, reflected in many films of the decade.

A lot of these films are not really worth watching, but “Blue Crush” released in 2002, is a fun but also poignant film about another female surfer who wants to overcome a tragic accident and make it in the big leagues of surfing.

This movie is fiction, but based very loosely on the story of “The Maui Surfer Girls.” It does have some B movie cringe moments, such as the clique “pep talks at sunset” and “bad romance,” but it’s an entertaining and uplifting “girl power” film that does stay quite accurate to the surfing world and surfing terminology.

“Point Break” is one of those movies that you just have to watch once in your life. You will probably find yourself enjoying it, despite some pretty poorly developed plot lines and a lot of misconceptions about surfers and surfing.

Some of the dialogue in this film is pretty rough, and at times the surfing represented on screen is just down right unrealistic. However, seeing Keanu Reeves and Patrick Swayze as surfer buddies/rivals is highly entertaining.

As mentioned, the surfing in this film is pretty unrealistic. No one gets barreled after only a couple months of surfing. But, there’s one plausibly realistic scene where it could maybe be Keanu Reeves actually surfing in California?

Again, this is a movie you don’t watch to get a good idea about what surfing is. This is a movie you watch when you’re just feeling like an easy ride action flick that doesn’t really take a lot of emotional investment. There’s this film, the 1991 version, and also a later version which takes the idea of the original and transforms it into something more modern.

When asked if this film is worth watching, we will just say: “Vaya Con Dios”- a reference which, after seeing the film, you’re just not going to forget. 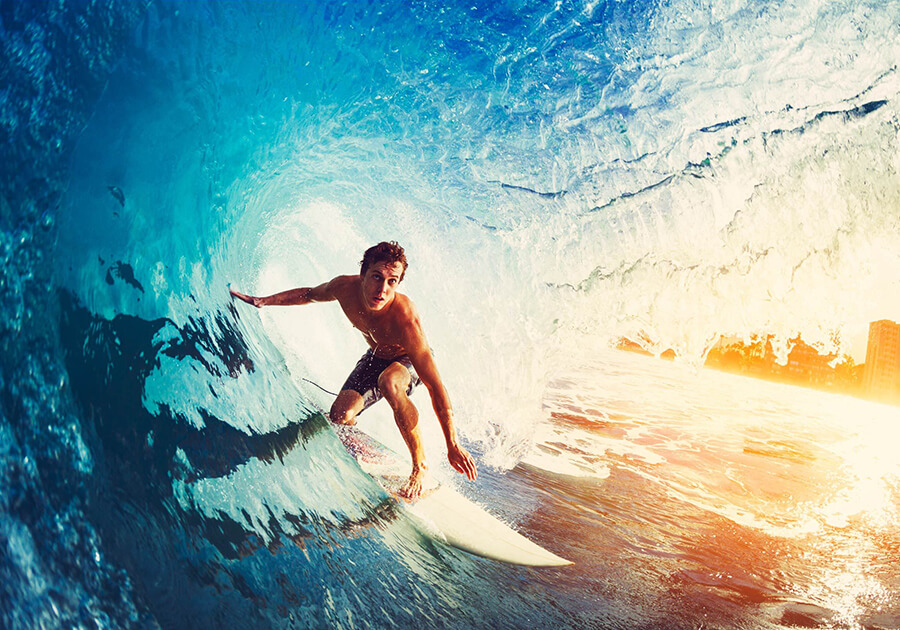